You are here: Home / Podcast / Nausea 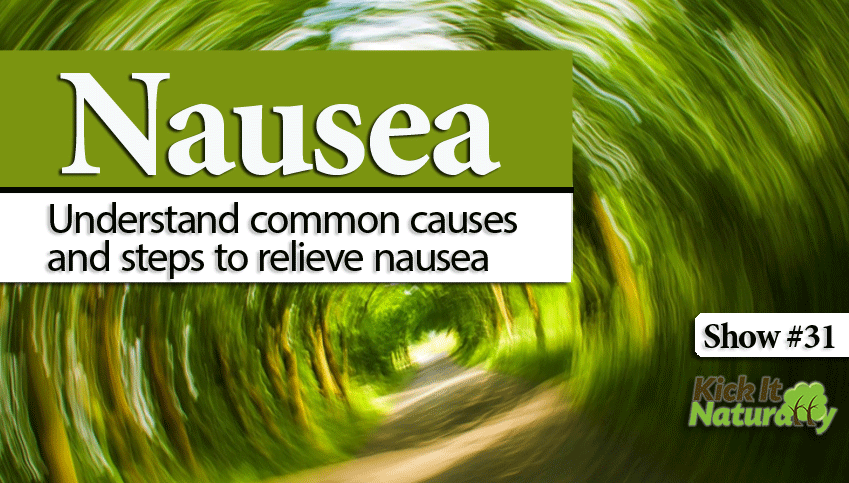 Tired of feeling like you just got off a roller coaster, or like you’re car sick every time you eat?  Nausea is an ultra bummer that can just make everything no fun at all.  Why does it afflict thee so?  Tune in to this episode as Tony, Will and Kinna share insights that can help you better understand the various common causes of nausea. We’ll delve into steps you can take to detect what’s probably provoking nausea in your case and share tips about what you can do to fix it.

T.C. Hale is not a doctor and does not claim to be a doctor, licensed in any type of medical field. Don’t be an idiot and use anything heard on this show as medical advice. This information should be used for educational purposes only and you should contact your doctor for any medical advice. Now get off me.

Kinna: Welcome to Kick It Naturally, I’m Kinna McInroe, and I’m here with

Kinna: We also have, something’s different, Will? Oh, you shaved.

Will: I did shave.

Kinna: That’s it! Okay, we have Will hottie patottie Schmidt here today and he shaved off his goatee, so that’s what it is.

Will: I think I look more anglo-saxon now.

Tony: It comes and goes rapidly.

Will: It’s that protein synthesis.

Kinna: I will say it’s different, but I do think it takes a couple years off.

Kinna: Uh huh. Exactly. Well, boys, what’s up with you guys today? Anything exciting going on in your lives?

Tony: I have pockets in my pants.

Tony: Yeah, so I can keep stuff there.

Will: I have some fun recipes. Stoked on our protein powder is getting closer.

Kinna: Wow, all right. Cool! Am I gonna get a big discount on that powder?

Will: If you’re nice to us.

Tony: You’ll only have to buy a big crate full.

Kinna: Okay, I see how you are. Okay, well if you have not liked us on Facebook yet, then what is the problem? What’s the defugalty people? Have y’all heard that word before? Defugalty? The word defugalty?

Will: I thought you stuttered. Defugalty?

Kinna: It’s an old word. An old Texas word, I guess. Uh, but you need to pull over, stop whatever you’re doing, even it’s dangerous, just stop and go ahead and like us at kick it in the nuts on Facebook and that’s where we’re going to post topics, every single week, about future shows and you guys can post any questions you want us to cover in the show.

Kinna: I thought you meant my paycheck and I was like that’s a big jump.

Tony: It’ll be different than your paycheck.

Kinna: It jumped a bunch of figures.

Kinna: Yeah. I’m not even getting paid. Okay, so today’s topic is nausea. Being nauseous.

Tony: I think it’s weird that we have a show where we talk about things that make people throw up.

Tony: We should do that more often. What else? We could do like a bulimia show? That’d be a good one.

Kinna: That’s a good one.

Tony: We could do a show on rollercoasters.

Kinna: Uh huh. Have y’all seen that thing on YouTube about the kid, he’s a little heavy kid and he’s scared to get on the rollercoaster? He actually does nearly fall off, but the woman beside him doesn’t know it the whole time and it’s like strangling him.

Will: Oh my gosh!

Kinna: But it was hilarious. He made it.

Tony: Where is this rollercoaster?

Kinna: I have no idea.

Tony: Cause I don’t want to sign up for that one.

Kinna: Yeah, I just watched this video that somebody sent me and I cracked up.

Tony: That should be required viewing before you go to the amusement park that day cause it makes everything like 10 times scarier.

Kinna: Exactly! So being nauseous, you know, sometimes I have this. It seems like in the Summer when it’s really hot, what’s up with that? I get like to where almost like I’m hungry, but I don’t even want to eat, which is odd because that never happens, and so then it’s like ew, I just feel kinda sick and gross to my stomach, so it’s not fun.

Tony: Well, let’s talk about what makes somebody nauseous before we get to like turbo things like that cause that’s advanced.