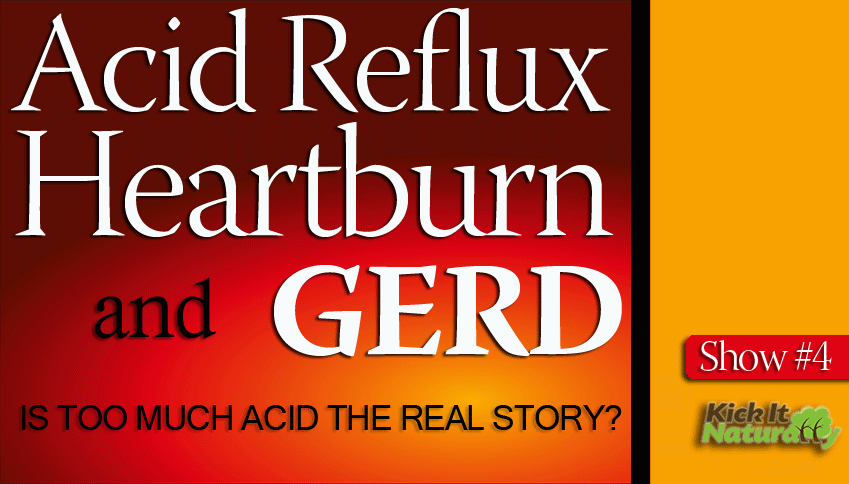 Acid reflux is a widely misunderstood problem.  Many people are lead to believe that acid reflux is a result of too much acid in the stomach.  The reality is that acid reflux, heartburn and GERD is very frequently the result of insufficient stomach acid production.  Listen in to this episode to learn the real causes and implications of acid reflux, heartburn and GERD.  We’ll discuss helpful tips and powerful digestive supplements you can use to correct your digestion and relieve your symptoms naturally and holistically.

Here’s a great video Tony made about acid reflux.

Disclaimer
T.C. Hale is not a doctor and does not claim to be a doctor, licensed in any type of medical field. Don’t be an idiot and use anything heard on this show as medical advice. This information should be used for educational purposes only and you should contact your doctor for any medical advice. Now get off me.

Kinna:             Uh huh. Exactly. So I just have one question right off the bat. So acid reflux, heartburn, GERD it’s all the same thing, but three different names?

Tony:              One some names are more fancy than the other. I think what happens is if somebody has heartburn they go to the doctor with heartburn the doctor’s like, “Oh, a lot of people have heartburn that’s no fun, but if I can say you have GERD, then I can diagnose you with something which means I can give you all these drugs and then that works out better.”

It’s got disease in there, so that makes you feel like, “Oh, I have a disease I better have a bunch of drugs.

Kinna:               Ok. Alright so hey, listeners out there, please follow us on Facebook at kick it in the nuts and we will post topics that we’ll be doing in future shows and then you can post any questions you might want us to cover in that show. So let’s just dive in a little bit to acid reflux, heartburn, GERD whichever one you wanna talk about cause they’re all the same.

Tony:              And we’ve been getting a lot of questions now too, so go on and     start asking some so that we can cover more stuff. But basically what happens is we eat something and then we get heartburn and it feels like someone is stabbing us in the chest and that’s not very friendly of that person to do and it can really suck like especially at night people go to sleep and they’ll wake up like feeling like somebody’s drilling in their chest or in their throat. And it’s it’s not fun at all. So what we’ve been taught is that our stomach is making too much acid and we have to take these drugs that either neutralize the acid which are all those chalky kind of you know tums kind of things that people take a lot. And that just kind of neutralizes that acid. Or we take other drugs that turn off the body’s ability to make this acid and then that symptom goes away and we’re all good. Yaaaaayyy! Bah. Yeah, that’s not so right. It’s kind of wrong. So what happens is this heartburn feeling that you’re getting is just the symptom that you’re feeling of the acid coming back up the esophagus. It’s not supposed to come back up. Once we eat food, it’s supposed to go do other things. It’s not supposed to come back up and say, “Hey, what’s it like where I came from?”

Tony:              You’re lucky though cause this one really blows. And but what’s going on is when we turn off that acid we don’t feel the heartburn anymore so we figure that we fixed the problem. The issue is that in our stomach we also make digestive enzymes and those are still coming up there just not acidic so we don’t feel it. So if you have a reflux problem and you turn off the acid you’re still having reflux you just don’t feel it and these digestive enzymes that are coming back up are made to break down protein.